Life In a Jar

I get a fair amount of email that has been forwarded along by friends and acquaintances. Some of it is hilarious, some of it is bunk, and some of it is drivel. I usually tried to find out the origins because I'm a bit compulsive that way and I like try to see if there is any validity or nuggets of truth therein. Once in a while this pays off in a big way.

Today I was forwarded the following:

Irena Sendler The death of a 98 year old heroine

Look at this lady - Let us never forget! 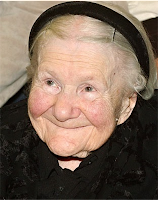 There recently was a death of a 98 year-old lady named Irena.
During WWII, Irena, got permission to work in the Warsaw ghetto, as a Plumbing/Sewer specialist.

She had an 'ulterior motive'.

She KNEW what the Nazi's plans were for the Jews (being German).

Irena smuggled infants out in the bottom of the tool box she carried and she carried in the back of her truck a burlap sack, (for larger kids).

She also had a dog in the back that she trained to bark when the Nazi soldiers let her in and out of the ghetto.

The soldiers of course wanted nothing to do with the dog and the barking covered the kids/infants noises.

During her time of doing this, she managed to smuggle out and save 2500 kids/infants.

She was caught, and the Nazi's broke both her legs, arms and beat her severely.

Irena kept a record of the names of all the kids she smuggled out and kept them in a glass jar, buried under a tree in her back yard.

After the war, she tried to locate any parents that may have survived it and reunited the family.

Most had been gassed. Those kids she helped got placed into foster family homes or adopted.

Last year Irena was up for the Nobel Peace Prize.

She was not selected.

Al Gore won --- for a slide show on Global Warming.

Please read the little cartoon carefully, it's powerful.
Then read the comments at the end.
I'm doing my small part by forwarding this message.
I hope you'll consider doing the same.

It is now more than 60 years after the Second World War in Europe ended.
This e-mail is being sent as a memorial chain, in memory of the six million Jews, 20 million Russians, 10 million Christians and 1,900 Catholic priests who were murdered, massacred, raped, burned, starved and humiliated!

Now, more than ever, with Iraq , Iran , and others, claiming the HOLOCAUST to be 'a myth'.

It's imperative to make sure the world never forgets, because there are others who would like to do it again.

This e-mail is intended to reach 40 million people worldwide! Join us and be a link in the memorial chain and help us distribute it around the world.

Please send this e-mail to people you know and ask them to continue the memorial chain.

It will only take you a minute to pass this along.

If even half of this is true, it is an amazing story.

Well guess what, the real story is even more astounding. The overall gist of the letter is true, just the details are a bit off. She portrayed herself as a nurse and not a plumber, the dog is a bit exaggerated and she was Polish, not German. She passed away on May 12, 2008.

There is an absolutely fantastic web site about Irena called Life in a Jar: The Irena Sendler Project. The home page is a bit sparse, but from there you can read about Irena's life on the facts page and learn about the project that the site is based on.

It all started when a rural Kansas teacher encouraged students to work on a year-long National History Day project. The teacher presented four students with a short clipping from a March 1994 issue of News and World Report, which said, "Irena Sendler saved 2,500 children from the Warsaw Ghetto in 1942-43." He noted that number of children saved was in all likelihood a typographical error since he had never heard of Irena Sendler. The four girls set to work to find out more about Irena Sendler.

What they found out was astounding. I quote from the web site:

The students wrote a performance (Life in a Jar) in which they portrayed the life of Irena Sendler. They have performed this program for numerous clubs and civic groups in the community, around the state of Kansas, all over North America and in Europe (250 presentations as of November 2008). The community of Uniontown has little diversity and no Jewish students in the school district. The community was inspired by the project and sponsored an Irena Sendler Day. The students began to search for the final resting place of Irena and discovered she was still alive and living in Warsaw, Poland. Irena's story was unknown world-wide, even though she had received esteemed recognition from Yad Vashem in 1965 and support from the Jewish Foundation for the Righteous in New York City. Forty-five years of communism had buried her story, even in her own country.

The whole site is an incredible read. You really, really should go over and read the story yourself. It's very moving and I can't do it justice.

Labels: Found on the internets