Artist of the Week: Gingerbread Houses 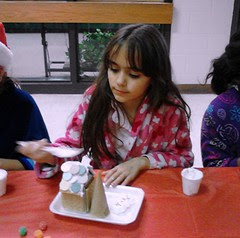 Rebecca, a photo by Teckelcar on Flickr.
Last year I featured a  picture of Max making a gingerbread house at school for the tradition" challenge. I always meant to show the finished products, but then I got side tracked. To rectify that oversight Max and Rebecca are this week's artists for gingerbread houses.

Technically they did not make gingerbread houses, instead of gingerbread, graham crackers glued onto milk cartons were the base. You can see what the blank houses look like in the portraits I took of Max and Rebecca. I almost didn't take any pictures that day, I had left my camera at home and it took me a moment to remember that my cell phone could work in a pinch as a very basic point and shoot camera. 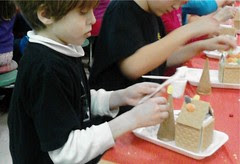 Max, a photo by Teckelcar on Flickr.
As you can see each child was issued a house, an ice cream cone, and a snowman marshmallow Peep all on a small foam tray. A cup of icing with a plastic knife and a boatload of candy rounded out the decorating supplies. The kids were left to their own devices, the parents were there to keep them supplied with candy and hunt down any special requests like green sprinkles.

The kids took it pretty seriously. Oh there was plenty of snacking on the supplies and chatting, but they all worked hard on their houses.Houses that were as individualistic as the kids that made them. 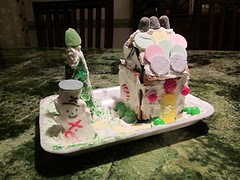 Rebecca's house, a photo by Teckelcar on Flickr.
Rebecca's house was very neatly done. She is experienced in working with frosting and was not afraid to pile it on. She kept her design very clean and simple. It's hard to see, but there is a very thick layer of frosting on the tray. She wanted a snowy yard for her ice cream cone tree and snowman. Necco wafers were used as roof tiles and to give the snowman a rounder top hat.

She was very happy with her house and as a result Rebecca has had a hard time  nibbling on any of the candy. Ultimately we'll have to toss the mess, but for now her house is relatively intact. 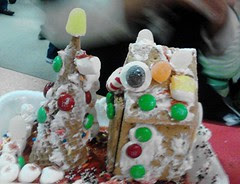 Max's house, a photo by Teckelcar on Flickr.
Max, on the other hand, had a far more splash-dash approach. He didn't care for the frosting and tried to use as little as possible.I think it is a combination of not liking the taste and not wanting his hands to get all sticky. The candy was fairly easy to knock off. The original plan by the organizers was to have the students carefully bag their houses in plastic for the bus ride home. I tried to slip it in the bag, but it was pretty obvious that the candy would get knocked off while squeezing in the house. So I told Max to skip the bag, I would just bring his house home in the car.
I think Max was only mildly interested in the project. However, he did enjoy picking off some of the candy once he was home and using the tree as an ice cream cone for his after school snack.
It was a fun project and a nice activity for the last day of school before winter break.
Posted by Sarah at 11:57 PM