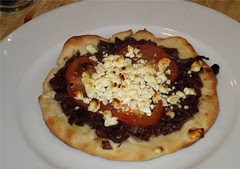 Pizza with Onion Confit, a photo by Teckelcar on Flickr.
This week's assignment from Baking with Julia was a twofer, Pizza and Onion Confit. For a full rundown on the recipes, go check out The Boy Can Bake.

I'll start with the pizza dough first. The ingredients are pretty much the same as my normal dough, recipe courtesy of King Arthur Flour. However there is a major difference, with King Arthur there is only one rise with BWJ there are two separate rises. The resulting crusts were different with BWJ having a smidgen more taste and a bit more chew. This falls in line with the extra rise, flavors have a longer time to develop and the enzymes get to work their magic on the structure of the dough. The new dough is worth repeating, but only if I have the time.

Now for the confit.

I was happily tossing onions into the pan, letting them soften, and rounding up ingredients when  I realized I was missing Thyme. I seriously thought I had some, but I was very wrong. I was then stuck with having to improvise. After rummaging around my spices for a good ten minutes I found a container of Greek Olive Spice Larry had brought home from Canada. Since I was planning on using Feta cheese I decided to toss it in. It smelt good, so how bad could it be? Turns out that was a very good idea.

The resulting confit was delicious, I kept sampling forkfuls as it cooled down. Just for the confit alone this recipe was a success. I heaped the onions on the pizza dough, added some thinly sliced tomato, and topped it all with crumbled Feta cheese. The finished pizza was amazing. The kids avoided the onions on their pizzas, though Jacob did try a bite of my pizza and was immediately won over. I loved the confit with the other toppings and didn't miss the red sauce one bit. I will absolutely be making this again.
Posted by Sarah at 11:38 PM

Love the confit too! Wonderful post. I'm not sure I would get my grandkids to try the onions either. I was skeptical, but the flavor was so amazing.

Glad the pizza and confit was such a hit! I had better luck with my dough after I let the other half sit in the fridge overnight. It seemed to have needed extra time to relax.
Feta would be an excellent cheese as well. I used goat cheese and loved it.

The confit was amazing! I too will be making this again very soon.

I really loved this pizza too. Great substitution for the fresh thyme!

Yeah for it being a hit! And the dough was so nice to work with.