Artist of the Week: Skeleton 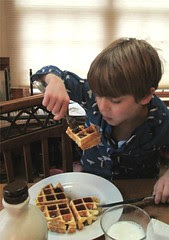 waffle boy, a photo by Teckelcar on Flickr.
This week it is Max's turn to be the featured artist.

I got this picture of Max last year as he was enjoying his very first waffle from his waffle maker. Since then he has had waffles more often than not, though usually it is just a half waffle. His siblings have been very much enjoying the bounty on the days Max decides to have waffles. This was clearly one of the best presents ever.

Anyway, let's move onto the reason Max is being featured.

Before winter break Max came home with a variety of school papers. Most of it was junk, various work sheets that were destined for the recycle bin. Amongst all the dross were a few bright bits that I set aside. One of which was a writing project that he did around Halloween. 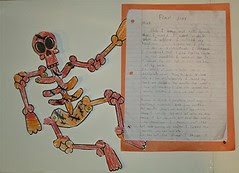 Skeleton, a photo by Teckelcar on Flickr.
An articulated cut out of a skeleton is attached to the following story:

Click I woke up,I felt different. When I moved I heard clicks. So when I got up I noticed my hand was just bones. Soon I realised I was a skeleton! Aaahh I screamed. I remembered that I died fighting a monster in the forest. Well. I would of won if it wasn't for its tail it felt like being hit by a horse.

Raaaa I heard a roar, thth there was rustling, I prepared. 12 deer jump out. Bang the monster jumped out and hit my shield. Shing I cut its tail off. I hit with my shield. Chomp it bit my arm off that was holding my shield.! Owww I screamed, it felt like hot lava burning my arm! Hu I tackled the monster into the lava pit.

In the last few seconds I thought it was good I came back to life. Quickly I jumped to cling on a root, so I can think was that all I came back for? It's not worth finding out I thought. Snap I, well I might as well join my friends.


I copied it word for word, rocky spelling and punctuation intact. I think it is a good story for someone who regularly announces that they hate writing, it is fun and inventive. I'm particularly proud of the fact that he used its and it's correctly. No mean feat in this modern age.
Posted by Sarah at 11:59 PM