Of Snowmen and Castles 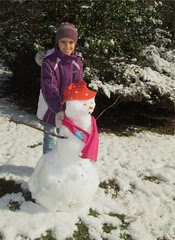 snowman, a photo by Teckelcar on Flickr.
Two and a half inches was all we got, but that was enough to make a snowman. It was very wet and heavy snow, perfect for making snowballs and snowmen.

Rebecca was up and out early to enjoy the snow. She has learned that the snow never lasts and this no snow was no different. By the end of the day most of the snow was gone and her snowman collapsed. Mind you having to male dogs did not help the snowman one whit.

Max made much smaller snowmen that he had hidden under the bushes. He figured they might last longer if he kept them out of the sun, he even went as far as to a make a wall around them. I'll have to take a look tomorrow to see how well that idea works.

miniature castle, a photo by Teckelcar on Flickr.
Meanwhile I discovered the neatest feature on my camera. My beloved Finepix bit the dust when I dropped it with the lens out. I ended up finding a cheap replacement on Amazon with the pre-Christmas sales.It's a A1300HD. The camera isn't nearly as sophisticated as my old one and I have been a little bit disappointed as I learn its limitations, but it is a good point and shoot plus it does a miniature effect ie tilt shift.

I have been enamored of the tilt shift technique and I am so very happy that I can do it. I think it is one of the most fun photographic manipulations out there. I think the castle truly looks like a miniature scale model. I'll try not to overload on this gimmick, but don't hold me to this. It is just plain fun and it makes me smile.
Posted by Sarah at 11:55 PM