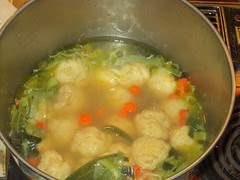 matzoh ball soup, a photo by Teckelcar on Flickr.
Winter has finally arrived with a vengeance. The 60+ degree weather is over for now. It has been dipping well below freezing and we have had the snow flurries to prove it.

I made this soup Wednesday, Rebecca has pestered me for some time to make matzoh ball soup and I had a couple of picked over roasted chicken carcasses in the freezer. I knew that Wednesday was going to be crazy and dinner would be easy with soup. People could serve themselves at their convenience.

It turned out to be a very good call.

Rebeca's soccer practice was canceled but Jacob had a basketball game to attend with pep band. Meanwhile home network was giving me fits. We switched our phone over to voip and it turned out our router was not up to the job. I spent a long time on my cell phone with a technical specialist to find out why the phone did not work. The oddest part was when I did get the right person on the phone he started our conversation in French.

Somewhere along the line he was told I spoke French. Which I found to be extremely funny. I bagged French after my freshman year in high school and never looked back. I can read very basic French, but that's it. The spoken language is beyond me. Fortunately he spoke perfect English and was able to suss out the likely culprit.

One quick trip to Walmart later I had a brand new router that is able to play nicely with our new phone system.

As for the soup, it came out mighty tasty. I used leeks instead of onions and that turned out to be an excellent idea.
Posted by Sarah at 11:41 PM