Thursday Three: What have your Pets and/or Children Have Done?

Today’s Thursday Three over on Possumblog is about:

Pets and/or Children!
Today’s episode of the vaunted Axis of Weevil Thursday Three comes to us via the dog- and child-rich person of Sarah Getzler, who wrote last week to say she wants to know some things about us:

As usual, anyone may play along, even if you have no pets and/or children--just make up stuff if you have to!
Just leave your answers in the comments below, or have your trusty sled-dogs pull all of this over to your blog and answer it there, and leave a link below.

Well since I have both children and pets, as Terry noted above, I’ll do both.

1) Children: Nate so far has been the most destructive of my children, but it was not malicious and I was partially to blame. About two years ago I was bustling about in and out the house picking things up. I had a huge piece of cardboard lying on the driveway between the open garage containing our new van and our old (no longer insured) van parked under the basketball hoop opposite the garage. Max and Rebecca were inside napping and the boys (5 and 7 years old) were playing in the driveway on the cardboard. I *was* going to pick up the cardboard, but the boys were having so much fun on it, throwing rocks and enjoying the sound of rocks on cardboard, I didn’t. A decision I later regretted. I thought to myself what harm could there be in that. Fifteen minutes later I found out what could go wrong. They had tired of their rocks on cardboard game and decided to throw rocks over the old van into the basketball hoop. Nate had a spectacular failure in aim and smashed two of the huge side windows of the van. We were thinking of selling the old van, but ended up donating it to the CFF since we didn’t want to pay for the new windows.

Pets: Crunch and John can dig enormous pits, but for actual destruction, I have to go with Rally. When she was much younger she would compulsively chase her tail. As she circled about she would lunge and bite at the nearest doorframe. She also got bored in her crate and chewed the heck out the balustrade railing that was next to her crate. I didn’t realize how bad it was until we were about to put the house on the market. We had to rip out the whole balustrade and replace it.

2) Children: I like how my children play around all the uplifted stumps and use them as play houses for their two population of imaginary creatures, the Hokahs and the Josephs. Then there is all the endless pieces of art and Lego creations that get featured each Wednesday here during Artist of the Week.

Pets: Crunch and John’s ongoing mission to rid the world of moles and cats from our yard. The moles are killed, but the cats are only chased out. I like cats, but I don’t like the presents they can leave in our sandbox that I’m too lazy to cover.

3) Children: Jake was a late talker, he really didn’t have conversation English until age four, but he could very clearly communicate and understood all that was said to him. At age 2 ½ he could correctly identify the make of any car. We could be standing across the street and he would point to each vehicle and name its color and manufacturer. The boy loved cars.

Pets: When I was growing up at one point my family had a standard dachshund, Throopie, and a standard poodle, Casey. They were an amazing pair together. We were on a dirt road and they were free to roam about, but they never strayed far from our property. One thing they would do was to go hunting for woodchucks. Casey would stand guard at one burrow entrance and Throopie would go through another to push the woodchuck out of its burrow to the awaiting jaws of Casey. It was an amazing example of cooperation between the two dogs. 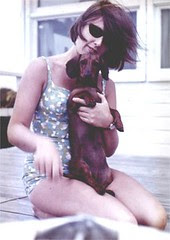 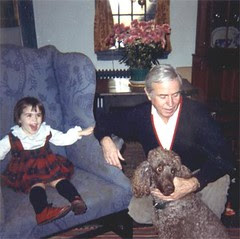 Sarah__Grandpa_Ralph_and_Casey
Originally uploaded by Teckelcar. And those are my answers to this weeks questions.
Posted by Sarah at 9:52 AM

hmmm, the most destructive things my kids and pets have done? well, my wife can't stand what she calls "your" dogs, and the kids (my favorite people in the world and my reason for existing) have put an irreparable strain on a weak marriage...
I'll let you know the biggest thing that they've destroyed...