Artist of the Week: Soccer

I admit it calling soccer an art form (at least on my children’s level) is pushing it, but this is my blog and I can do what I want.

That aside, Jake and his team did a bang up job during last weekend’s tournament.

With a lot of heart and some lovely moments of game play they advanced to their division finals. The championship game was tough. Their opponent had already beaten them once and the game was mid afternoon under brilliant blue skies and the temperature at 80+ degrees.

Jake, unfortunately, had all of his energy sucked out of him by the harsh sun during the last game (he is just like me, I melt under the hot summer sun) and was a bit lost. But he was a solid player for the previous three games.

soccertourney
Originally uploaded by Teckelcar. In the end our guys lost. However they did get this very nifty medal in recognition of their effort. 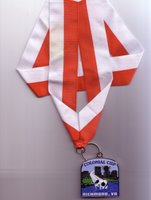 It is just like the first place medal; the only difference is that second place got a red ribbon and first got a blue ribbon.

I am very proud of my boy and this trophy has some actual meaning to it, as opposed to all the participation stuff we have gotten before.
Posted by Sarah at 11:48 AM