Last Friday, due to the kindness of Meryl, Larry and I got to have a real honest to goodness date night. It just so happened to coincide with a friend of mine’s art opening down in Richmond. She is member of artspace and is participating in the Annual Members’ Exhibit. Afterwards we would then catch a movie.

Meryl came by around 5:00pm and we dined on pasta with assorted turkey day leftovers. After dinner, thumpies and Rebecca’s pointed questions as to why we were still home we left for the opening.

My friend was very pleased to see us and we chatted for awhile and scoped out the show. She had three photographs on exhibit and though they are lovely, they are not the $700 photographs. Hers are a much more reasonably priced. 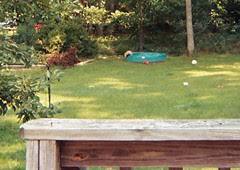 possum
Originally uploaded by Teckelcar. It’s a rather fuzzy picture of a large possum enjoying our wading pool.

I stopped by Costco today to pick up our pictures, some books for the kids and a few snack items. Total number of items sold = 11, total price on the register $835.30.

The cashier, his assistant and I were all stunned into silence.

For a brief moment I thought maybe the previous customer(s) total(s) got lumped in with mine. A floor manager came over and she quickly sorted out that the cashier had somehow mis-keyed the price on one set of photographs. Instead of $8.79, it came out as $708.79. My only comment was that none of the photographs I was picking up were worth that much.

The overcharge was soon voided and I went on my merry way with my photographs that had been briefly valued at over $700.
Posted by Sarah at 10:51 PM