Artist of the Week: Bridge 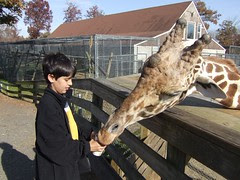 Jake&giraffe
Originally uploaded by Teckelcar. School was out yesterday and the day before, so on Monday we went to the zoo. It was a gorgeous day to go and we all had a good time and as always we had fun feeding the giraffes.

Anyway, Jake and Nate have been recently inspired to draw bridges. The one below by Jake particularly caught my eye. 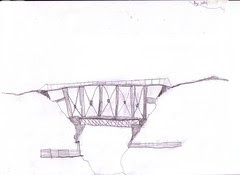 Bridge
Originally uploaded by Teckelcar. I think this burst of bridge drawings was brought about by some programs we recently watched. One was about building the new Hoover Dam Bypass and the other was about the new East span of the San Francisco Bay Bridge. Both are awe inspiring projects that resulted in some captivating shows.

In Jake’s picture I like the supports that are driven into the walls of the river canyon. Jake felt that this would result in a stronger bridge than just using pilings that drive straight down to the river below. Just today he mentioned that Architecture and/or construction were one possible career path as was farming. I told him either way it looks like Virginia Tech would be the way to go. He has a long time to make up his mind.

It looks like the G Brothers Construction Company is still going strong.
Posted by Sarah at 9:35 AM