I Live in a Frat House 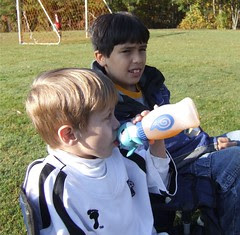 chug
Originally uploaded by Teckelcar. Max, as y’all know, has CF. Most people with CF need to consume 30 % to 50 % more calories than the average person because most people with CF suffer from pancreatic enzyme insufficiency. They need the buffer of extra calories since it is harder for them to digest their food and their bodies have to work harder to fight infections from the excess sticky mucus in the lungs. It is very strange thing to have a nutritionist tell you that your child should have more butter and salt in their diet. As a result Max gets to have ice cream three times a day. Mind you he eats plenty of healthy things, like fruits and vegetables, but he needs to pack in the calories.

Lately Max has been not really drinking his milk. It isn’t an all out refusal, but he isn’t drinking as much as he should. I have offered to add flavorings like strawberry, chocolate and vanilla, but it is to no avail. And no, he is not lactose intolerant; he is just being a normal five year old.

The other night I was at my wit’s end. I tried the routine “you need to drink your milk if you want to be big like Jake and Nate.”

As I cast about for a new tack I noticed that I was almost done with my milk. I help it up and commented to Max that I had already drunk a fair amount. At that moment I realized that I had the same amount left in my glass as he did and then it hit me. Max is a fairly competitive little boy; maybe I could use that to my advantage.

“Hey Max, do you think you could drink your milk faster than me?”

Max was delighted with the idea and grabbed his glass.

I then had a chugging contest with my five year old son.

I held back a bit and made sure we finished at the same time. And finish he did.

The following night Nate, with a sparkle in his eye, challenged Max to a milk chugging contest. Again, it worked.

So now it looks like we are going to have nightly chugging contests at the dinner table.

This was not something I envisioned when I became a parent.
Posted by Sarah at 11:47 PM