A Jedi and His Dog

On Sunday I took John to a dog show down in Williamsburg. The night before I called a friend who went Saturday to ask about how her dog did (extremely well) and how the weather was (extremely cold).

The weather question was very important because the show was held outdoors. Oh there are tents for grooming and the ring entrances are lined up under a large central tent, but the main areas are fully exposed to the elements. I noticed Saturday morning it had been very cold out on the soccer fields and I knew it would be cooler down by the water where the show was held. I was right. My friend said it was still bitterly cold at noon and that everybody ws swaddling there dogs in blankets. She told me that if my dog had a coat I should bring it. Ring time was 9:30 am so there would be little time for the sun to warm things up.

I think years ago I got a coat for our dogs when we were living in Wisconsin. I tried putting it on Crunch and Rally when the temps dipped below zero, but each time they would be struck by “coat paralysis” and were unable to move about. Standard dachshunds are not foofie little coat wearing dogs and they would rather do turbo potty runs than be caught in a coat. However, I felt that I should do something for John since we were going to be stuck outside for quite sometime and a fair amount of that time would be spent just standing around. Dutifully I dug around in the garage, but I had either tossed or lost the coat. So I decided to make one. I was still riding off the high of making Nate’s costume and I figured why not. How hard could it be?

After a bit of searching I found this site that has a pattern for a hooded coat for greyhounds. The directions seemed clear and the pattern could be easily modified to fit a dachshund. I opted to skip the hood and make a folded neck instead. I had plenty of material to make the coat. I used the same fabric for Nate’s robe for the outside and the inside was a red fleece blanket that was no longer used.

After a few false starts it came out very well. 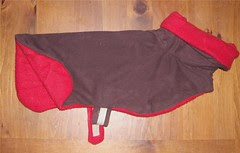 dogcoat
Originally uploaded by Teckelcar. After the initial measuring John was surprisingly cooperative. I would call him over and drape him with whatever I was working on and he would happily stand there. He was even willing to wear the finished product at the show. It was a hit with other exhibitors and I was pleased with the result.

The coat was also a huge hit with Nate. He right off noticed that the coat was made with the same material as his robe. He readily agreed to don his robe for a photo shoot with John.

Here we have a Jedi Master Nate instructing his Padawan John. 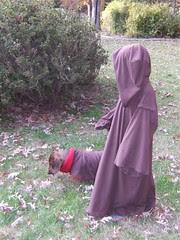 disturbance
Originally uploaded by Teckelcar. Here is just a nice shot of the two of them together in the woods. 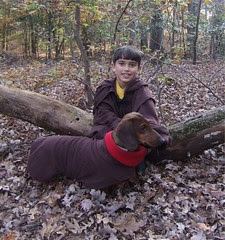 Jedi&dog
Originally uploaded by Teckelcar. John looks huge next to Nate who is seated on a log.

Then finally here is John nosing about in the woods, clearly not inhibited by the coat. 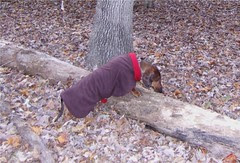 sensing
Originally uploaded by Teckelcar. Maybe he senses a disturbance in the force.
Posted by Sarah at 11:57 PM