Artists of the Week: Pumpkins

This week the whole crew gets to be Artist of the Week. 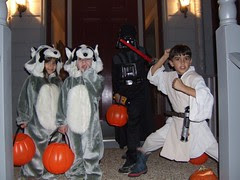 trickortreat
Originally uploaded by Teckelcar. We spent part of Monday afternoon and all of Tuesday afternoon carving up our pumpkins. Each child got to pick and design three pumpkins, the remaining six were at my discretion. I carved three on my own and solicited ideas for the final three pumpkins.

The end result was a whole lot of pumpkin guts and some mighty fine looking pumpkins. Each of the following pictures is linked to a smaller set of pictures. To see the set, click on the picture and go from there.

First up is Jake. 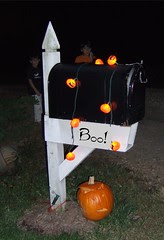 Jake3
Originally uploaded by Teckelcar. He wanted his pumpkin to be by the mailbox this year. We hoped that maybe we would get a few more visitors by draping the mailbox with pumpkin lights and having a lit pumpkin. Sadly, it did not work. Maybe Next year we should put up a sign at the intersection of our street with the main road. Anyway Jake is a traditionalist at heart. He was very excited that this year he was able to open up the pumpkin (with the BIG knife) and clean them out all by himself.

Next up are Nate’s pumpkins. 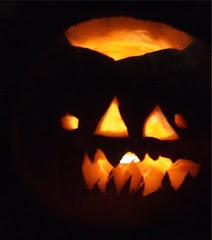 Nate2
Originally uploaded by Teckelcar. He was only marginally interested in the pumpkins. He liked messing about with the pumpkin guts, but the actual designing was rather slaspdash. He wanted to play more than carve. But he did have fun when we were all done

Max was a bit more involved. 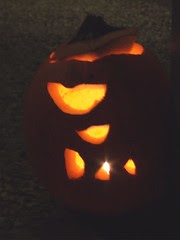 Max1
Originally uploaded by Teckelcar. His first pumpkin was a bit abstract. You really need to see the next picture in the set; there you get to see all the little squiggles I had to sort through when I was carving it. On his second and third pumpkins he had a better grasp of what was going on and developed easier designs for me to carve. 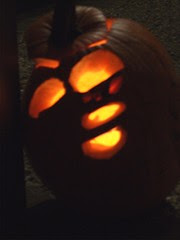 Rebecca1
Originally uploaded by Teckelcar. Like Max’s initial effort, her designs were hard to carve. I couldn’t quite figure out what exactly was going on with her first pumpkin. In addition to the bits I carved out there was a big swirled design with an arm and hand sticking out. The second one had a coherent face with an adorable bonus drawing on the side. Maybe it’s a parasitic twin? The last one features a “cooking guy wearing a cooking hat holding an acorn.” From what I gathered he got bonked on the head with the acorn and is now holding it up. I carved out the top and bottom of the acorn since it seemed to be an important element to the design.

Finally there are my pumpkins. 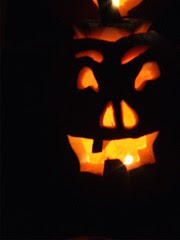 Mama2
Originally uploaded by Teckelcar. The kids were all impressed that I could clean out, design and carve a pumpkin in well under 15 minutes. It is one of the oddest skills I have and as I explained to Jake, it takes practice. I had some nice lumpy pumpkins to work with this year. I was very pleased with Mr. Big Nose. Then I took suggestions after I finished with my three. Max wanted a baby bat and was happy with what I made as was Rebecca with her kitty pumpkin. Nate was off playing and that left Jake with the final pumpkin idea. He wanted a vampire with a huge open mouth and two fangs. At first the mouth was two small, but I was able to fix that. He still wasn’t completely happy with the final design, but I thought it looked great once it was illuminated.

And here is what it looked like when they were all in position. 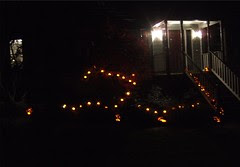 Halloween
Originally uploaded by Teckelcar.
It was great fun and I look forward to doing it all over again next year.
Posted by Sarah at 3:22 PM