Artist of the Week: Legos 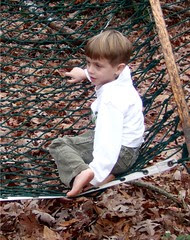 Max
Originally uploaded by Teckelcar. It is a glorious day today and Max and Rebecca are enjoying some outside time in the hammock. Rebecca has been begging for me to set up the wading pool, but that is not going to happen.

Anyway, Max was very excited to get his first real Legos on his birthday last month. We started off with the two kits built according to the detailed instructions, but since then he has taken off with his own creations. 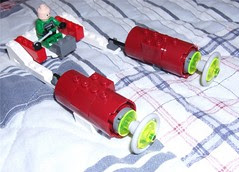 Max'spodracer
Originally uploaded by Teckelcar. This is his very first podracer made with “big kid Legos.” It is very much like the ones his brothers make all the time. He is justifiably very proud of his own creation. He made it entirely on his own. So now I have another Lego pit in the making, just after I finally trained his brothers to pick up after themselves.
Posted by Sarah at 1:43 PM