Last night we had not one, but two end of season soccer parties. So we did the sensible thing, divvied up the kids and took Jake and Nate to their respective parties. Larry took Jake and Max and I got Nate and Rebecca. I also made a cake since Larry was Jake’s coach and had organized the shindig. Originally we were shooting for Jake’s team, The Blue Rays, to have its party on Wednesday, but the place the team had settled on was booked.

I made my basic 1-2-3 cake with chocolate frosting, a classic and dependable cake. 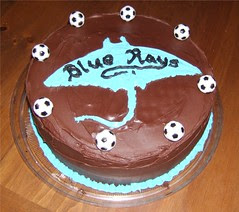 BlueRayCake
Originally uploaded by Teckelcar. The ray on top is actually patterned after a manta and not a blue ray. It just came down to my liking the shape of the Manta more than the slightly circular blue ray.

The cake was very popular and only the central core was left.

Meanwhile Rebecca was very disappointed that she was not going to the party with the cake, but she cheered up when she spied the cupcakes. There was that and her getting a whole plateful of cherry tomatoes for dinner. And I’m not kidding about the plateful.

Nate’s party was at CiCi's, a pizza buffet that has a small salad bar. As we were going through the line a second time to get Rebecca something for dinner (Nate had already grabbed a few slices and was happily parked at the table with his team) a young man was restocking the salad bar with tomatoes. Rebecca was delighted, because on our first pass there were no tomatoes. The young man noticed Rebecca and proceeded to load up a plate just for her. Rebecca was speechless when he handed the plate to her. I was too until he offered to put more on. I thanked him and politely declined. If I had been filling her plate it probably would have been a third of what she was given. The amazing thing was that she polished off the whole plate, a small slice of pizza and a cupcake.

She sure does love tomatoes.
Posted by Sarah at 11:50 PM

There are thousands of High Quality Channels streaming live football from around the world. We are here to show you how to find them. Receive live match links in your mail account. English Premiership Football and European Soccer Streams. Note all matches are as per BST.

Special Introductory offer:
Live match links in your mail account at only £1.00 GBP. Free for First Day if you subscribe it now.

1. Free Software:
We will provide you all software you need to get live match at your desktop.

3. What's Needed:
Just need is to click on the link, start the software and match is on your desktop.

3. Live Soccer:
Watch live soccer online on your PC no need of buying Sky or Cable?

Soccer Live Matches At Your Desktop