The Great Costume Project of 2006

Or as Terry would put it: My Moron Project.

As I mentioned here I had decided to make Nate’s Halloween costume this year and this is what the pattern looks like: 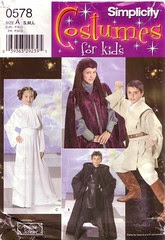 pattern
Originally uploaded by Teckelcar.
My plan was to make the boy’s white tunic costume and the cloak in a brown material. It looked fairly straight forward and I was willing to give it a shot.

It took two and half days of steady work to make the whole thing. A fair amount of my time was spent puzzling out the directions. In the end I was able to put it all together and have something that fairly closely resembles the pattern’s picture.

Here it is hanging on the back of the front door. 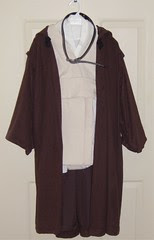 A nice thing about the costume was that I did not have to make pants. Nate was able to use a pair of khakis that looked just dandy with the costume.

Here a shot of Nate in the costume.

Withrobe
Originally uploaded by Teckelcar. I think he looks pretty spiffy, but then again I am a wee bit biased.

Sadly, on the big night he did not wear the cloak. 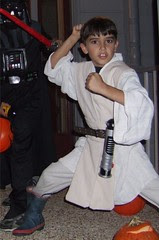 Withoutrobe
Originally uploaded by Teckelcar. This was a pity, because that turned out to be the most challenging part of the costume to make. The hood was a bit tricky with all sorts of folds and stitching, but the hardest part for me was trimming the hem. I dithered for a bit before I cut away four inches of excess material. I was loath to cut it, because once you do that’s it, there is no going back if you take off too much. It is possible to fix it, but it won’t look as nice.

Anyway, I proud of what I made and I like the knowledge that I can make a nice costume.

Oh and as I was making it, Rebecca came over, picked up the pattern’s cover picture, pointed the Leia costume and said “I want that when I get too big for my costume.”

All righty then, I think I can do it. The hard part will be getting her to let me do her hair.
Posted by Sarah at 2:28 PM