Yesterday was nasty outside, but inside was lovely.

turkey
Originally uploaded by Teckelcar. I think this year’s turkey was the prettiest one I have ever roasted and was tasty to boot. Originally I was thinking of just getting a turkey breast, but I found a deal that was too good to pass up at my local supermarket. If I bought $40 worth of groceries (that is not a big deal for me) along with my turkey, the turkey would be only 25 cents per pound.

The rest of the meal was equally good.

partypotatoes
Originally uploaded by Teckelcar. This was my first attempt at “party potatoes,” a long time favorite from my mother. I decided to go with them because I wanted to make mash potatoes with and without garlic. Meryl and the kids are not big fans of extra garlicky potatoes, but Larry and I had a hankering for them. And here is another shot with one on my plate with a nice bit of gravy on top. 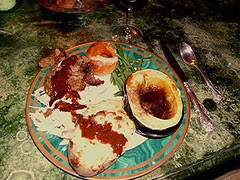 dinner
Originally uploaded by Teckelcar. After the main course the kids cleared out and the grownups got to partake in a very enjoyable “chocolate course,” courtesy of Meryl. If Meryl ever offers to pick up some chocolate for you do not refuse. She made some excellent choices and introduced us to a new to us candy, sponge.

Then we sat around and chatted until it was time for dessert. 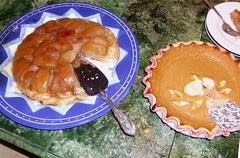 Appletart&pumpkinpie
Originally uploaded by Teckelcar. Both were so good and were a wonderful close to such a good meal.

And the best part, I got to have apple tart and pumpkin pie for breakfast today.
Posted by Sarah at 4:31 PM