Artist of the Week: Recital 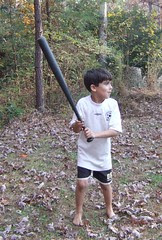 Nateatbat
Originally uploaded by Teckelcar.
This was from his birthday party, note the bare feet. It was a very warm day, but cold doesn’t deter this boy. He would be happy to be barefoot when it’s freezing outside, though he does concede that bare feet in the snow is not fun.

In addition to his final soccer game and his birthday party last weekend he also had a piano recital on Sunday afternoon. He performed his composition Laser Quest and was one of only three students (out of 25 students for this session) who performed their own musical compositions.

Here a shot of all the kids after the recital with their certificates.

recitalgroup
Originally uploaded by Teckelcar.
It was quite a range of ages, from an adorable almost four year old to a bunch of gangly teenagers.


He has performed this piece before. It was at the very informal composition camp recital and that was just after he wrote the piece.

The clacking noise during the glissandos mystified me until I realized it was the sound of the buttons on his jacket’s sleeves rattling against the keys. I’ll have to come up with some kind of solution for that noise.

We had a good time and, since Grandma and Grandpa were in town for Nate’s birthday, Nate’s grandparents got to attend one of his recitals.
Posted by Sarah at 1:29 PM