Today I would like to give a heartfelt thank you to all that have served and those that still do this great nation.

Below is a picture of my father in uniform flanked by my Grandma Dot and Great Uncle Robert. 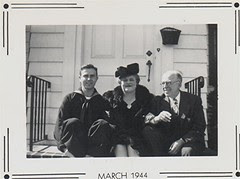 dad+grandmadotGURobert
Originally uploaded by Teckelcar.
He looks so cute and freshly scrubbed in the photo. I know I’ve posted it before, but it’s too good not to.

And just for the heck of it here is a picture of my mother from June/July 1944. She is the young woman in the center with the champagne and flowers. 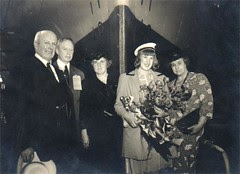 Nana_and_the_liberty_ship
Originally uploaded by Teckelcar. She had the honor of christening a Liberty Ship that was named for a family member. The man on the far left was her father, my grandfather and the woman on the far right was her mother, my grandmother. I’m not sure who was the other couple; I’d have to ask my mother. Anyway, I thought it would be fun to include the launching of a ship that had carried many veterans and stood us in good stead.
Posted by Sarah at 9:45 AM