Artist of the week: Goal! 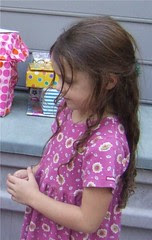 Abbey
Originally uploaded by Teckelcar
This week's artist is Max and Rebecca's teammate, Abbey a.k.a. Cat.

Cat is a fun little fire cracker of a girl with two big brothers. Her father was to drop her off for Max and Rebecca's party, but instead he remained at our house along with Abbey's brothers. The boys are roughly Jake and Nate's ages and they all meshed well and had a great time.

Anyway, at the end of season party on Saturday Abbey presented Larry with this drawing. 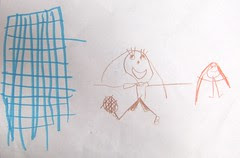 
It is a picture of her just about to a shoot a goal. As I recall the second figure in the picture is Rebecca looking on. It is an utterly charming picture and Larry was very touched by the gift. I think it meant much more to him than the official thank you card he received at the party. He knows that it required a fair amount of effort on her part to make the drawing, to remember to bring it to the party and to actually present it to him.

Seeing how my husband felt I declared it to be the upcoming Artist of the Week.

So hey, it's not always about my family.
Posted by Sarah at 2:44 PM