Sometimes You Just Have To 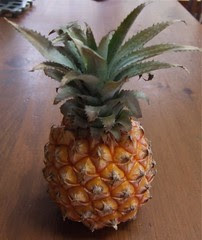 baby pineapple
Originally uploaded by Teckelcar
I was wandering about the produce aisle today looking at the strange, the inedible and the ordinary when I rounded the corner and spotted the cutest little pineapple.

It's called a baby pineapple and is from South Africa. I picked it up and my nose was rewarded with the sweet smell of ripe pineapple. I put it in the cart figuring at the very least the kids would love its diminutive size.

I briefly considered bringing home the Buddha's Hand, but it was a bit pricey for something to buy on a whim. I have no idea what it was or what to do with the little oddity. As for the inedible, well you know that I wouldn't waste money on that.

Anyway I brought the pineapple home and I was right. 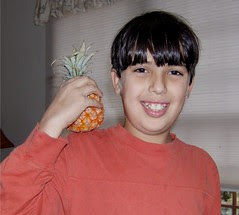 Jake
Originally uploaded by Teckelcar
Jake was very excited and even agreed to pose with the fruit. He looks so happy with that tiny little pineapple. Another nice thing about the picture with Jake is that you really get to see how tiny the pineapple is in real life.

When the rest of the crew got home they all marveled at the petite pineapple. It smelt wonderful and we were eager to cut into it and see if it was as good as the full size version. Then Jake got a very good idea.

As I was photographing it I commented that it looked more like Spongebob's house than a full size pineapple does. Its golden hue was just right as were its proportions. Jake suggested that we try to recreate the Bikini Bottom domicile with paper cutouts. 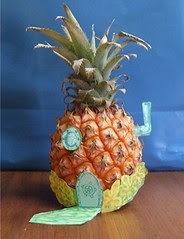 After a bit of searching we found a decent picture and printed it out with a little seat of the pants resizing.

I think the end result is quite good. I pretty much nailed the size for the cut outs on the first try. Max was upset at first when I started taping everything on, he thought I was spoiling the fruit. I had to explain to him that we never eat the outer rind. The the part we actually eat is still safely tucked inside the fruit. This mollified him and in the end he agreed that the overall effect was pretty good and it had been a worthwhile thing to do, because sometime ya just gotta do it.
Posted by Sarah at 11:50 PM