Soccer ended on Saturday and thus heralded a slew of post soccer season parties. Traditionally (at least around here) the team books a back room at a local restaurant, trophies are passed, a card and/or gift is presented to the coach and the kids get to goof around with their team mates for one more time.

Saturday was our first party. It was for Max and Rebecca's team and was held a little Italian joint. I whipped up a cake and decorated it with the team's name and the players' aliases. 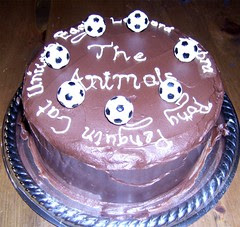 When the team was selecting its name Larry settled on "The Animals" and each child would be called by their chosen animal name. So Max became penguin, Rebecca was pony and so on. Anyway it was fun and most of the cake disappeared. I was able to save one slice so that Nate could get the traditional slice of cake for breakfast on his birthday on Sunday.

Sunday was Nate's birthday and that took up the afternoon, thankfully I was able to make dinner and saved us from going out again. It was a good thing too, since Rebecca fell asleep before dinner and didn't wake up until much later. Chasing boys around all afternoon is tiring work don't cha know.

Monday we had Nate's party and another Pizza/place Italian joint. We have been there before and we like the pizza, but this time it wasn't so great. I don't know if it was the acoustics of the room itself or the fact that it was a very rowdy bunch of 8 to 9 year olds, but it was loud. Painfully loud for Larry. The kitchen was overwhelmed and it took forever for our food to come out. It was a late night for us.

Tonight was our last soccer party and we are very ready for it to end. Max was not happy when I told him it was time to leave for the party. He made it very clear that he did not want to go. We were back at the first Italian place and they were not quite ready for us. The group that had the room before us was taking their own sweet time in leaving, but in the end they finally cleared out. It was quieter than the last party, but still loud. Max cheered up immensely when he saw his (and Rebecca's) good friend was there. Aubrey is the younger sibling of one of Jake's teammates and we have known him for quite sometime. He was on Max and Rebecca's first soccer team and they have been friends since. Anyway, it was a fun night and I only had to ride herd on the team a little bit. I have become friends with a few of the mothers and I'll miss them until next season.

But... I'm glad the soccer season is over.

All that is left is a swanky "Flat Stanley" gallery exhibition over at Nate's school on Thursday. At least we'll have a day to recover before this last party.
Posted by Sarah at 11:25 PM