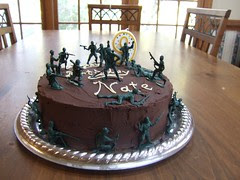 army cake
Originally uploaded by Teckelcar
It just dawned on me that I never showed the internets Nate's birthday cake. The cake itself was nothing remarkable, my orange cake with chocolate frosting, but the decoration on the outside is.

Admittedly it's just a bunch of plastic army men with one of them supporting the big number 9 candle. Nate wanted an army cake and that is what I came up with. He and all his friends were utterly delighted. Nate wanted them afterwards, but I said "No, they're mine, all mine."

With three boys in the family I figure there will be at least one more army themed cake. I had bought them just for the cake and even splurged by paying an extra $1.50 at the drug store over the buck at tour local Dollar Tree. I thought that maybe the slightly higher quality plastic would be a little less lethal (yay made in China!). I carefully washed then in hot soapy water water and gave them all a good rinse. So far there have been no ill affects.
Posted by Sarah at 11:21 PM