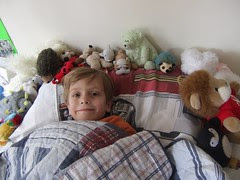 Max and friends
Originally uploaded by Teckelcar
Some nights Max very meticulously places all his stuffed animals and last Saturday was one of those nights.

He carefully arranged his friends around the edge of his pillow and declared it cool. He wanted me to take a picture of him all nestled in bed right then, but I refused. It was late, the camera was in the car, the flash would wash things out and I didn't feel like schlepping downstairs to dig it up and drag it upstairs to satisfy the whim of a six year old. Albeit a very cute and articulate six year old. So I put him off with the promise of taking a picture in the morning.

So of course at the crack of dawn I was awakened by a little voice asking me to take a picture.

I blearily told Max not now, but he was insistent. I had to threaten him with a time out before he would leave me alone.

A few hours later I took the promised picture and it was an indeed a very cute photo.
Posted by Sarah at 10:59 PM