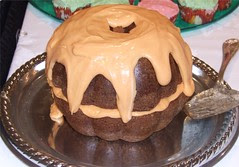 Pumpkin Spice Cake
Originally uploaded by Teckelcar
Sometime around Halloween my mother sent me a pumpkin shaped cake pan, or rather mold. It's from Nordic Ware and if you click here it will take you to a full description of the cake pan.

Along with the pan came a tiny little card bearing a recipe for "Great Pumpkin Cake." It's chock full of errors, but the overall idea seemed good. My biggest complaint though, is the name. It really should be called Pumpkin Spice Cake since the cake itself has no pumpkin in it and is really more of a spice cake. Anyway here is the corrected recipe.

Preheat the oven to 350 F. Grease and flour the cake molds. In a medium bowl sift together the first seven ingredients (flour through salt), set aside. In a large bowl cream the butter, sugar and orange zest together until fluffy. Add eggs one at a time and mix until combined. Add flour mixture alternately with milk until just blended. Stir in sour cream. Pour batter into the two molds. Bake 35-40 minutes, until tester inserted in center comes out clean. Remove from the oven and let cool ten minutes in the pan before inverting onto a cooling rack to coo completely.

In a small bowl combine all the ingredients together *except* for the milk. The milk is to thin the frosting after approximately 1/2 cup is used as filling between the halves of the cake. Leave about 1/2 inch rim around the outside. Then placed the two halves together thus forming a pumpkin. Then slowly add the milk to the frosting/glaze to thin it the consistency of thick cream. Spoon the remaining glaze over the top of the pumpkin.

The resulting cake was quite tasty. Next I'll probably skip the food coloring. I liked the shade of orange I came with, but Larry thought is was a bit lurid. It will be just fine with a plain white frosting/glaze. Hopefully I'll have better luck with getting the glaze to neatly run down the sides of the cake.
Posted by Sarah at 11:58 PM