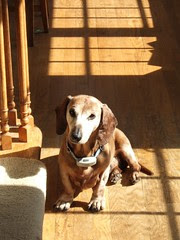 Crunch
Originally uploaded by Teckelcar
Today I did the hardest thing I have ever done, I took Crunch in for his last trip to the vet.

He had been rapidly failing this past week. I actually made an appointment for last Friday, but he perked up over Thanksgiving and enjoyed some pumpkin pie. I was happy to cancel the next day, but in the back of my mind I knew it would be soon. He was just over 15 years old and had a good long run.

I called the vet clinic this morning in tears and they arranged for me to head over at 11:00. I spent the morning fussing over Crunch, even feeding him a few syringe fulls of yogurt. I sat outside with him in the bright sunshine, his frail body warmly wrapped in a soft towel. When it was time to go I gently placed him on the front seat, still wrapped in his towel. For his last ride he rode next to me and was not banished to the crate in the back. My right hand rested on him during the whole ride.

At the clinic they were very kind. They brought me tissues when I first arrived and left a box for me in the examining room. The vet was so gentle as he slipped the needle in. With a final sigh I felt Crunch completely relax and then he was gone, his spirit slipped free of his failing body.

He was such a strong dog and such a sweet boy, everybody was Crunch's friend. He was my first show dog and was a natural in the ring. He loved showing and I'm so glad I brought him out for my club's specialty. He wasn't entered, but he had a grand time being at the show. He also was a true hunting dog and woe to any small animal that dared set foot into his backyard. He was a truly versatile dachshund and had earned his Versatility Certificate from the Dachshund Club of America despite my novice handling.

When he grew older, with graying muzzle and paws, he was still an outrageously fit dog. He could still move like a champ right up until last Spring. He was an amazing dog and I'm so lucky to have been with him all these years.