Artist of the Week: Flat Stanley 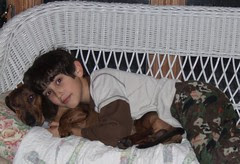 Nate
Originally uploaded by Teckelcar
This week's artist is Nate. Here he is curled around his buddy John. Nate loves dogs and John in particular. When they are not racing around the house I'll find the two of then together, happy as clams.

But this is not about John or even dogs in general, it's about Nate's Flat Stanley.

A while back Nate had a big Flat Stanley project for school. We sent off his Stanley along with an instruction sheet to my friend Paul in Australia. A few weeks later Stanley returned with a huge amount of pictures and all sorts of neat stuff. Then it was up to Nate to pull the whole thing together in a sort of scrap book. 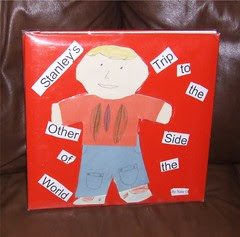 cover
Originally uploaded by Teckelcar
This is the cover to the end result. If you click on the photo it takes you over to my pictures and from there you can see the whole set.

Nate did the bulk of the work with just a little help from me on the captions. The entries with a red border are excerpts from the diary of Stanley's adventures in Australia. I think it came out rather well. His final grade was a 97 out of 100 points. The only thing that held him back was that the teacher wanted a bit more research included in the captions. Nate did a little, but not quite enough.

I loved the whole thing and I can't thank my friends enough for what they did.
Posted by Sarah at 11:30 PM