A Bright and Shiny Smile 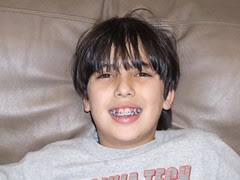 smile
Originally uploaded by Teckelcar
Yesterday was Jake's big day at the orthodontist. After seemingly endless dental appointments, tooth extractions and an expansion bar, he finally got his braces.

It took just over an hour.

He was fine until about four hours later when it hit him. His teeth and jaw ached. Dinner was pretty much uneaten. A little ibuprofen and twenty minutes later he felt much better.

This morning he was miserable, so much so I let him stay home. I figured he had earned it. He was a champ after his teeth were pulled and headed off to school with nary a peep.

But tomorrow he'll be back at school.
Posted by Sarah at 11:50 AM