Artist of the Week: Sledding 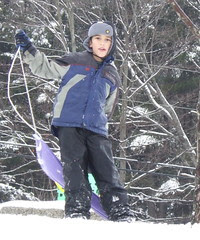 Nate
Originally uploaded by Teckelcar
One of the high perks of visiting my mother, aka Nana, up in Vermont is that it is Vermont. We are far more likely to encounter snow up there in quantities far greater than what we experience down here in old Virginny.

Nate is this week's artist for his dare devil enthusiasm for the sport of sledding.

He desperately wants to learn how to ski and/or snowboard. At some point we'll ship him west to my brother in Colorado, but until then he has to make do with the awesome sledding hill next to his Nana's and the various sleds she has in the garage. For the five or so days we are there, he is outside hitting the snow.

This year he came up with a new twist. He decided to try riding down the hill while standing up. Ironically he hit on this notion just after I commented to Larry how my brother and I used to "surf" down the hill on our sleds. Larry suggested that I show Nate and I replied that he didn't need and encouragement from me on how to find new ways to wipe out.

And wipe out he did.

I started giving him pointers like bend the knees and stick out your bottom. And of course I had to show him how I did it (and I'm proud to say I did a decent job- the wipe out at the end was a bit rough, but not injurious). As the day wore on he got better and better, to a point that he was better than I ever was.

And here he is:

He was fine after that wipe out. I loved the fact that he'd give a big thumbs up after each and every one.
Posted by Sarah at 11:49 PM