There is Snow and Then There is SNOW 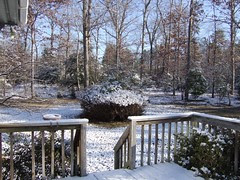 snow
Originally uploaded by Teckelcar
We got some snow last night. The final total wasn't overly impressive (less than an inch), but it was enough to coat the yard with pretty white fluff and paralyze the area.

We were planning on heading up to Richmond for a concert at VCU. Jake picked out a woodwinds and percussion master class/ concert to fulfill his quarterly requirement for band. I had forgotten about it until that afternoon when I found the flyer stuck amongst some papers. We decided the whole family would go since it was both free and at a reasonable hour (6 to 7 pm).

But then the now kept falling and we decided to rethink our plans. As I stated to Larry "I have full confidence in our ability to drive in the snow, but I have serious doubts about the other drivers in the area." Richmond drivers are not known for their winter driving skills and this being the first snow event of the season it seemed prudent to stay home.

So home we stayed, well except for Nate who went off on a sleepover.

The snow we ended up getting was pretty, but not much to write home about. Even John was unimpressed, he just didn't like the cold stuff between his toes.

Bailey on the otherhand, in this great video off of YouTube, got a much nicer dumping from a blizzard in the 1990's up in Colorado. Warning there is music with the video, but it does add to the clip.