Artist of the Week: Portrait of a Dog 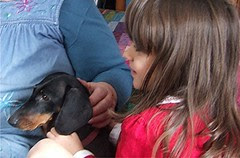 Originally uploaded by Teckelcar
This week's artist is Miss Rebecca.

She loves to draw pictures and her efforts are littered about the house. She will also have me mail off pictures to friends and family. Ther will be no note, just a cheerful little drawing carefully cut to size and signed by Rebecca.

She also loves dogs, in this picture she is sitting on the couch with my mother's dog Gwen. The two of them really enjoyed each other's company during our stay at my mom's house. Rebecca still missed our dog, but Gwen's presence blunted her sadness quite a bit.

A few days ago Rebecca came home with a couple of roughly index card sized pictures she made at school. 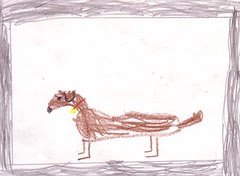 Originally uploaded by Teckelcar
Both were of dogs, one was of a rather long legged and the other was this cute fellow. She told me both were of our dog John, but the first one (the long legged beastie) did not come out quite right, so she tried again. She liked both of them and proudly showed them off.

I love them both, but especially the second one. Jake thought at first Nate had drawn it and was doubly impressed when he found out it was his sister's handiwork.

I find the portrait evocative of the illustrations from Circle Dogs, one of the many children's books I have that feature dachshunds (I collect them, so sue me), but not completely. Her art is very much her own.
Posted by Sarah at 11:58 PM