Artist of the Week: Gingerbread houses 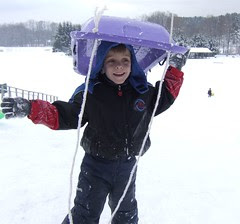 Max
Originally uploaded by Teckelcar
This week I have two artists of the week because I couldn't decide which one to feature first.

Max is looking pretty happy here with a sled on his head. After a couple of sled runs he was grinning from ear to ear. Max definitely likes doing the sled thing.

Anyway he also had fun making his gingerbread house which has no gingerbread in it at all. It is an annual project at the elementary school and it involves graham crackers hot glued to empty milk cartons, royal icing and a ton of candy donated by the parents. 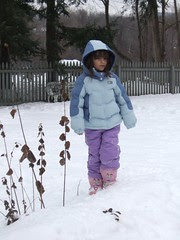 Rebecca
Originally uploaded by Teckelcar
I got to help both Max and Rebecca with their houses because the "parties" were scheduled on separate days. (I think the two teachers got together and planned it out that way, they recognize that it's tough having two kids in the same grade.) It was good messy fun and it was the first time I've been able to participate in this project.

Rebecca (caught here in Nana's backyard) was first up. I brought in icing that I made from pasteurized egg whites because I'm paranoid that way. Before we started the teacher did a big speech on how we must not eat the frosting because it contains raw eggs, which I appreciated from a food safety stand point. Not that the kids weren't going to inadvertently eat some of it. Rebecca made the whole thing herself. All I did was split up the liquorice whips. She came up with the whole thing and did not want any help from me. I think I might have suggested the doorknob, but that's it. I think it looks quite spiffy. When were done the houses were left in the classroom to dry over night. This would give the icing sufficient time to reach its final rock hard consistency. Her house is the one on the left (click the picture of the houses to see more of them in their photo set with the added bonus of notes). 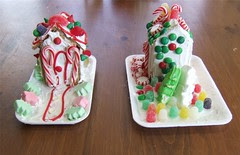 front
Originally uploaded by Teckelcar
Max's house was made on the following day. He wanted me to be a little more hands on than his sister. I got to smear the frosting all over the house. Max does not do sticky and I was not at all surprised to get the job. Once the house was frosted, he took over. I really liked what he did with the candy canes. I never would have thought of that. The peppermints on the left side just cracks me up. He carefully placed the peppermints and then declared that they were a tractor. The M&Ms represent cut grass while the gum drops are the longer, uncut portion of the lawn. Such a guy. At the end of Max's party I took his house home and picked up Rebecca's that is how they wee able to get home intact. Buses are not kind to gingerbread houses.

I'm glad I was able to be there when they created their little masterpieces.
Posted by Sarah at 12:16 PM