About Those Cake Balls 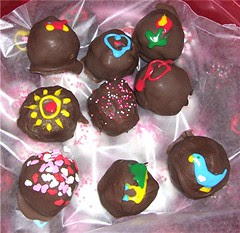 more cake balls
Originally uploaded by Teckelcar
Last Saturday I slipped on a little picture of some cake balls I made for Valentine's Day.

I first learned about cake balls from Cake Wrecks: Sunday Sweets (a sort of unicorn chaser to all the horrors shown each week). Bakerella had made an outstanding Valentine's box of chocolates and had included a tutorial.

I was initially tempted to recreate the whole thing, but then I realized it involved fondant and I refuse to have anything to do with it. So I decided to just make the cake balls, with of course a few modifications.

For the cake ball interior I used my flourless chocolate torte. For the cream cheese frosting I used the oh so easy and oh so tastey one over at Slashfood.

After the cake completely cooled I added about a cup of the cream cheese frosting. It was pretty darn goopy so I refrigerated the whole mess before making the balls. The balls, even with refrigeration, were very sticky si into the freezer they went. Because of all the goings on they spent about a day and a half in there until I could finish making them.

For the chocolate coating I used the store brand chocolate bark in small batches. It worked out very well. I plop in the frozen ball, roll it around a bit to coat and then place it on wax paper. If we wanted to add sprinkles, we had to act fast before the chocolate set up. Rebecca loved the Valentine themed decorations I had picked up. For the gel writing we had to wait until the chocolate had completely solidified. Rebecca made some hearts, a snail and a red bird. I made the sun, the blue bird and the red heart with an arrow through it. We had a great deal of fun decorating the cake balls.

For varieties sake I picked up some almond bark, white candy coating. It was a real pain to work with. It was hard to melt and the cake balls kind of melted into the coating. I ended up with only a few white cake balls, the rest came out like dirty snow balls.

As for taste... they were a big hit, even the white ones tasted good.The cake ball interior tasted like a high end chocolate truffle. We will definitely try these again.
Posted by Sarah at 3:28 PM