A Pretty Good Day for Baseball

As I mentioned yesterday, on Saturday Nate was the bat boy for the VSU baseball team. It turned out to be the home opener for the team and it was a beautiful day for baseball, sunny and mild. Nate had a great time hanging out in the dugout and getting the bats.
Batboy
Originally uploaded by Teckelcar
The team and the coaches were all really nice to Nate. He would get to do high fives with players and coaches whenever he returned to the dugout and some players liked to pat Nate's helmet as they passed by. 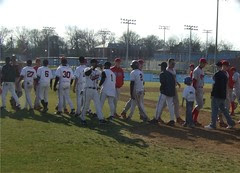 handshake
Originally uploaded by Teckelcar
Unfortunately it wasn't the team's day. The first baseman did make a spectacular catch, but in the end VSU lost. However, Nate was still a winner. Not only did he get to hang with the team, he was also invited to participate in the post game handshake. He looks so cute there with all the college ball players.

The guys seemed to genuinely like Nate, but that's not surprising. Nate is an affable little guy with an obvious love of the sport. They probably saw a bit of themselves in Nate.
Posted by Sarah at 11:59 PM