Artist of the Week: Practice Concert 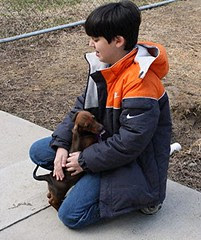 Jake
Originally uploaded by Teckelcar
This week's artist is Jake. He is pictured with one of the puppies we saw this past Monday, I think it's the shaded red boy that is being called DJ (as in Dell junior- he looks a lot like his uncle Dell).

Anyway it's a puppy and it's cute and my boy looks happy.

As I'm sure I've mentioned before, Jake has continued with his trumpet and is taking intermediate band. Tonight both the intermediate and advanced bands put on an informal concert. It was officially the Pre-Festival Concert and will be followed by the actual Festival Concert next month. From what I've gathered the bansd while be judged at the Festival. This concert was a good practice run through for both bands.

I think Jake's band did a decent job of things. They performed four songs, Stony Creek (a warm up march), Irish Tune from County Derry (essentially Danny Boy), Chester Variations (I liked it quite a bit, but the clarinets were a little off) and Phantom ship (my favorite, but my video card got full and the camera cut out at about 30 seconds before the end).

The kids have come a long way from beginning band. They are perfect, but they continue to improve. Below is a clip from the concert. It's thge first tune, Stony Creek.

I would have liked to feature Phantom ship, but I forgot to clear out the camera before the concert. Hopefully it'll stay in for the Festival and I'll get to properly record it.
Posted by Sarah at 11:54 PM