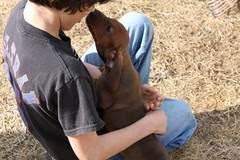 snoodle
Originally uploaded by Teckelcar
So here are a few pictures from Monday's puppy love fest.

I love this one of Nate with DJ. Andy (my friend Dianne's husband) took this picture and I'm so glad he sent it to me. He was able to get a get picture of DJ sticking his big old snoot into Nate's face just before the pup started to give Nate a good face washing.The puppies have not a shy bone in them and they just hurled themselves into whatever lap was available.

I just love dachshund snoots and how they get poked into everything. 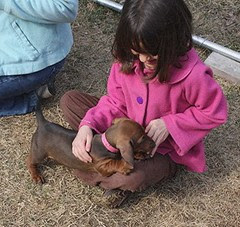 In the pink
Originally uploaded by Teckelcar
Since that's me in the upper left corner this must be another picture from Andy. I like how little Miss Pink's collar almost matches little Miss Rebecca's jacket.

Rebecca was totally in her element and was very happy to have the puppies swirling about her. Since it was far better weather this time, we were able to sit outside in the dog yard with the puppies.

Last time we had to stay indoors and it was very cramped in the puppy room. This past Monday we got to see the puppies run and play in between cuddle sessions and I didn't have to worry so much about the puppies getting accidentally stepped on. 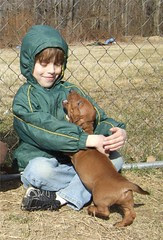 Max and Big Red
Originally uploaded by Teckelcar
Even Max had a good time, the puppies were able to elicit quite a few smiles from him. Which, considering he had been diagnosed with a rather nasty ear infection just 24 hours earlier, was pretty impressive.

Max was a bit put out at first because the puppies were not mobbing him but, when we moved him out of the shade and into the sun, it was puppy time. The pups would run on over and jump onto his lap. He didn't like it when they would try to kiss him, he prefers to just hold them. At one point a puppy started tugging on his jacket and Max started to play a bit of tug with them using a cord dangling off of his jacket.