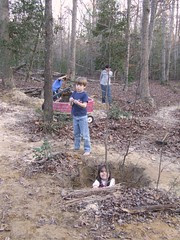 work in progress
Originally uploaded by Teckelcar
The kids were hard at work this weekend.

It was warm and sunny which meant it was good weather for fort construction. They deepened the crater, added a loose roof and paved the paths. Mind you the paths weren't paved so much as had a layer of dirt spread on top, they just called it paving. They were delighted that the dogs would use the paths as they tear around in the woods.

I'm hoping it means less ticks in the summer. If everybody stays on the paths and avoids the leaves maybe they won't pick up as many ticks. The ticks can be awful around here and I know from previous summers that as long as we stay out of the woods it's not too bad.

Anyhoo, you can see Nate is hard at work shoveling and Jake is off to get more wood. I'm not sure what Max is up too and the small pit Rebecca is in isn't quite as deep as it looks, she is sort of crouching down a bit. 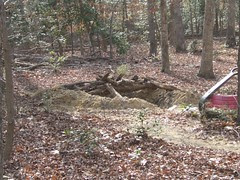 the fort
Originally uploaded by Teckelcar
The roof of the main fort was made made from various pieces of dead fall and logs on our property. It definitely adds to the bunker like feel. They wanted to drag an old table top onto the roof, but I stopped them. I think I will however break down and let them use a hack saw on the dead fall. It will just have to be under supervision. It's a good life skill, everybody should learn how to use a saw properly.

When a do a bit of pruning this spring I'll let them drag the brush onto the roof. It'll make for a more naturalistic appearance and that should make them happy. My only other suggestion is that they deeper the main crater a bit. As it is now it hard from them to get in, especially for Jake. 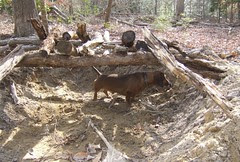 inspection
Originally uploaded by Teckelcar
Here is a better shot of what the fort looks like on the inside. I sent John in to give a bit of scale. John was very happy in there and spent a good 10 plus minutes carefully inspecting every nook and cranny. He likes to dig and appreciates this kind of effort (in fact he started the smaller pits that have since been expanded by the kids). Dell, on the other hand, was pretty much uninterested. Digging is not his thing. He would rather roll over a get a tummy rub.
Posted by Sarah at 11:24 PM