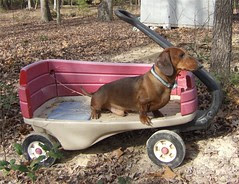 Dell
Originally uploaded by Teckelcar
And how they differ.

Readers of this grubby little corner of the internet know that I have dogs and that they share the same father, Crunch.

Crunch was a grand old boy and we had him for almost 15 years before the ravages of time took him away. He was 11 and 1/2 when he sired his first litter and produced John. A year later he was studded out again and Dell was the the result of that litter.

The two boys are very much Crunch's get, but they are so very different. I would say physically John is the most like Crunch with his leggy athletic build. Dell has more of their fathers manic energy and boundless enthusiasm with life. Both have a very strong prey drive and are personally affronted by the mere existence of squirrels in our yard. In fact a few weeks ago John actually nailed and eat one of the little buggers. Dell spent the rest of the day trailing after John like a love sick fan of a movie star. John had become his absolute hero.

The funniest difference between the two is digging.

Both of them will dig, but with Dell it is a halfhearted affair. It's almost like he doesn't want to dirty his cute little paws. I plopped him in the wagon while John was off digging and Dell was perfectly content to oversee all the dirty work.

John, meanwhile, has a very workman like attitude. His motto is "dig we must." I filmed him yesterday in action out in the woods. I loved it when he paused and snorted in the mole/mouse hole he was excavating.