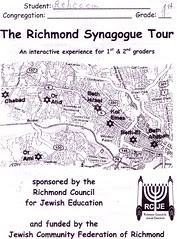 Since there are seven different synagogues, the tour was broken down into two parts. This year the children will visit all the "Or" (plus either Chabad or Kol Emes) and next year it will be the "Beth" tour. A really nice aspect of the division is that both tours run the gamut of Reform, Conservative and Orthodox.

I volunteered to tag along because of the whole enzyme issue with Max and it looked like fun. I have never been to most of the synagogues on the tour. 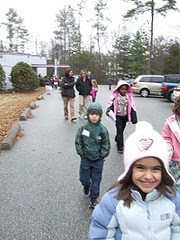 Or Ami
Originally uploaded by Teckelcar
It was a dreary day, but Rebecca was still able to smile, Max so much. We started out at Or Ami, just located south of the James (everything in Richmond is gauged by the James River). The Rabbi was warm and friendly. He started off by asking who was from which congregation and made the same comment about Beth Ahabah's name that I've been making for years. Namely, it translates to "House of Love" and really the only way to say it in English is with a Barry White intonation. Already I like the guy. He then did a very brief presentation about Or Ami and pointed out the features of the building.

We then opened our booklets and started matching up the pictures with their correct synagogues. If you click on the brochure up above you'll see what I mean (you need to go to the photo set or just page through my photo stream). Then it was back onto the buses for the rest of the tour. 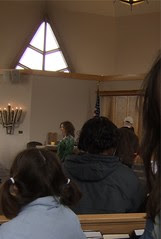 Or Atid
Originally uploaded by Teckelcar
Next up was Or Atid where we have actually been before. The sanctuary is rather unique, it is a separate structure from the main building with striking walls of glass.You can see it from the road as you drive by and it has inspired all sorts of stories in our family. Jake noticed the high roof and announced that his imaginary friend (he was about four at the time) Mr. Giraffe attended services there. Mr. Giraffe, Mrs. Giraffe and all of their children enjoyed going there because it was one of the very few shuls with a ceiling high enough to accommodate them. So I guess we could say that we knew giraffes were kosher long before the big announcement last June.

Any way I wish I had gotten a picture of the exterior, (Yay Google maps!) but alas we were running late. I was just able to snap a few inside before we got herded back onto the bus. It was a long ride to our next stop and we had a snack passed out while we filled in books. 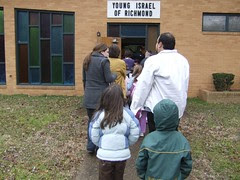 Young Israel
Originally uploaded by Teckelcar
Our last stop of the day was Young Israel, Congregation Kol Emes. Being a seriously orthodox congregation, our group was split by gender. All of the males went to the main seating area of the sanctuary while the females went to the small walled off area off to the side. The rabbi after a bit entered and explained that the sexes were separated so that it was easier to concentrate on Torah and in a way creating a special place to pray.

It was quite a change for the majority of the kids there (mine included).

We learned about Tefillin and the Rabbi demonstrated how he donned his prayer shawl and then the tefillin. It was a fascinating experience for me, I have had very little exposure to the world of the very Orthodox. I did have my camera, but I decided that it would not be appropriate for me to take pictures inside the building.

Then it was back to the JCC and home.
Posted by Sarah at 2:56 PM