Artist of the Week: Soup 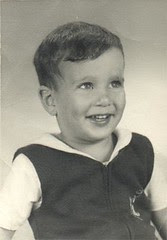 Young_Larry
Originally uploaded by Teckelcar
This week's artist is my husband.

I'm not sure when this particular picture was taken, Larry looks to be about three or so. I honestly don't know. However, he certainly was a cute little guy and I can definitely see a resemblance between Larry and Nate. They are also temperamentally the most alike. While watching Nate hurl himself about Larry often tells me he was just like that.

Anyhoo many moons have passed and the little boy pictured here is all grown up and a father to a whole passel of kids. He has also become a pretty darn good potager. The most impressive part is that he is completely self taught. All I have done is tell him how to use the crock pot and get some twist top containers (much better for bring to work) to store his soup. He does it all, from the shopping, the chopping and to the cooking.

soup
Originally uploaded by Teckelcar
The whole soup thing came about as a good way for us to save money and provide Larry a healthy lunch. One big batch from the crock pot usually sees him through the week.

When he makes his soup he loads up the crock pot with all the vegetables he loves. I think he really enjoys the whole process of chopping things up and adding whatever spices appeal to him. He'll even toss in some roast chicken if we have leftovers in the fridge. The kitchen always smells great on soup night. 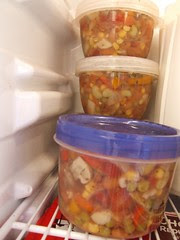 soup for lunch
Originally uploaded by Teckelcar
Once the soup is done he loads up the little containers I bought for him. The screw tops really make difference when you are transporting something as liquid as soup to work. The last thing you want to deal with at work is a big spill of soup in the office or, even worse, in the car. At least in the office you can get it mopped up fairly quickly.

There is also the little side benefit that he doesn't have to go out to pick up a hot lunch. A nice thing indeed last week when it kept on raining.
Posted by Sarah at 11:53 PM

Labels: Artist of the week, Larry