Artist of the Week: Illumination 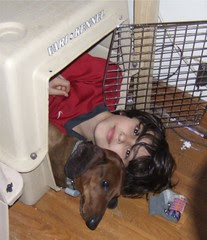 Nate and Dell
Originally uploaded by Teckelcar
This week's artist is the very silly Nate.

For whatever reason he decided to get into Dell's crate with Dell. It always amazes me what sort of tiny spaces Nate can cram himself into. But what was truly remarkable was that even with Nate entirely inside there was still more than enough room for Dell to join him.

They were both very happy in there together and we were even able to close up the crate. You can't tell by Dell's expression, but trust me, he was one very happy dog. The thumping of his tail could be heard clear across the room.

Apparently they were having so much fun John felt compelled to stand in front of the crate and bark at them. I sent Rebecca over to sit in John's crate, but that wasn't the same. 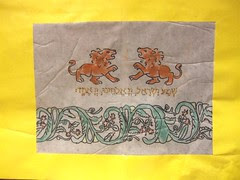 Shema
Originally uploaded by Teckelcar
As for the art, a couple of weeks ago Nate's Sunday school class had an in school project and the parents were invited to participate. We were to make our own illuminated text. Several different pieces of Hebrew text were scattered about along with tracing paper, examples of designs that we could use and all sorts of drawing supplies.

I picked out the Shema. It is my favorite prayer and as Nate pointed out, the shortest one available to copy.

Nate traced the text along with the decorative scroll work he selected from the pile. My job was to color (under Nate's direction) and to create the two lions. I wanted to have the Lions of Judah because they are a classic motif in Jewish ceremonial art and I thought Nate would like them. The ones the school had to trace were far too big so, I had to make them myself. Nate was pretty happy with how they came out so he agreed to have them included.

Once the text and its illustrations were finished, we mounted it in a yellow paper frame. I was a bit concerned about the pastels I used getting all smudged so I laminated it once we got home.

I think very well. Now we just have to find a place to hang it, maybe up in Nate's room.
Posted by Sarah at 11:55 PM