Artist of the Week: Legos Plus! 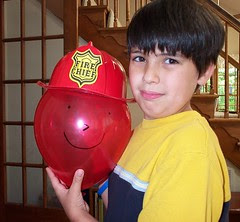 Jake&friend
Originally uploaded by Teckelcar.
This week you get almost a double shot of his creative efforts. In the above photo he is with a friend of his own making. As I recall his friend did not last very long in our active household.

The featured project this week is one of his Lego creations. As I have written before Jake is a builder at heart. 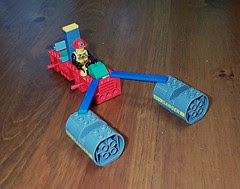 Jake, like his brothers, is a big Star Wars fan. Using the Legos we have he was able to create his own podracer.

We have a few kits for various projects, but this was wholly his creation. I like the use of existing things being reused in new ways. Nate, inspired by his brother, also made a podracer. Together they race about, banging into each other and rebuilding their racers.

I know that some kids will build something and then set it aside so it will not be harmed. Not Jake, when he builds something he plans to use it. His creations inevitably get damaged and he does sulk a bit and storm about, but he usually rebuilds a better version and moves on. I like that, I just wish he would skip the drama.
Posted by Sarah at 3:21 PM