Last Saturday we went to the Chesterfield County Fair.

We got to ride on little tractors. 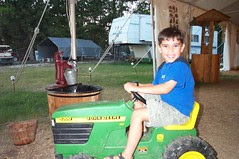 tractornate
Originally uploaded by Teckelcar.
We got to ride behind big tractors ...

bigtractor
Originally uploaded by Teckelcar.
in a string of barrels.

allaboard
Originally uploaded by Teckelcar.
We made friends with baby goats 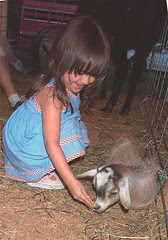 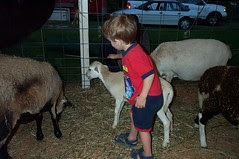 maxlamb
Originally uploaded by Teckelcar.
Fortunately I remembered NOT to buy the food for the animals in the petting zoo. The animals will mob you for the tiniest amount of feed. It is a bit much to have sheep crowding about and goats jumping all over you. The animals are still friendly if you don’t have food and as a result are much nicer to be around.

Jake and Nate passed on the petting zoo this year. Instead they stayed in the kid’s tent and played with the ride on tractors. Max and Rebecca got to play there too. Max enjoyed the pedal tractors, but they are still a little tricky for him to maneuver. Rebecca preferred playing in the corn crib. 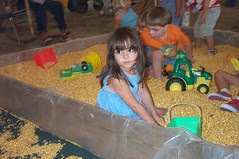 corncrib
Originally uploaded by Teckelcar.
The corn crib is essentially a sandbox full of dried corn kernels. It is fun to play in and much cleaner than a sandbox.

We also visited the chickens and the rabbits in their respective tents. The fair is a true county fair where all sorts of animals are on exhibit and judged. After we were all done seeing the animals we headed on over to the midway and bought tickets for the rides. Meryl calls the fair’s rides lame, but they are just right for our crowd. They haven’t been to any of the big amusement parks and Jake really doesn’t like rides in general. He prefers the games.

Larry and I split up, I took Max and Rebecca and he took Nate and Jake. At this point it was quite dark so pictures were not possible of the bouncy tent and Larry did not have a camera when Nate went on the racecar ride. From what Larry told me it would have been cute. Nate was paired up with a little boy that was exactly the same size. They both had a blast on the ride. Instead you’ll have to settle on pictures of Max and Rebecca on the carrousel. The first one is what I think is the best picture I have ever taken of Larry and Max together. 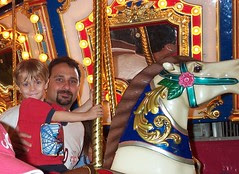 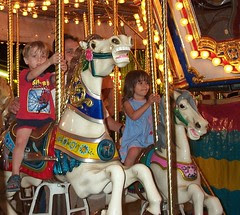 
Rebecca REALLY LIKED her horse. She had to be peeled off and was in tears afterwards. She had to be carried back to the car. It was a good thing we were done for the night.

Oh and Jake, he was a little camera shy this year. I snagged this one of him helping his siblings out of the barrel cars.

ride'send
Originally uploaded by Teckelcar.
He had a very good time and won a stuffed cow. We came up with a little song for it while waiting on his siblings in the midway. It goes something like this: "Moo, moo, moo, you got a cow. Oh wow you got a cow." ad infinitum.

All ready they are clamoring to go back to the fair, but they just have to wait until next year when it returns.