This is an odd image of my children’s hands 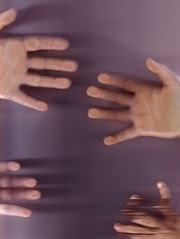 kidhands
Originally uploaded by Teckelcar. A few weeks ago, before the start of school, I was scanning a bunch of pictures. I have a small flatbed scanner (which I love) and it does a nice job on all sorts of projects. The lid has a “Z-lid expansion top” that enables me to scan bulky items like books.

They found it fascinating that I could put a picture under the lid, push a button and the picture would slowly appear on the computer’s screen. Then I could change the picture (or not) and print it out.

As I watched them I remembered how much fun it was to use a copier for the first time, but this was even better. I then got the idea that we should scan their hands.

The boys were all very cooperative; they placed their hands down on the glass and waited patiently for me to lower the lid and start the scan. Rebecca was another story. She fidgeted about, wiggling her fingers and moving her hand about. As a result the image of her hand has an odd stuttered quality to it.

I considered doing another scan, but only Rebecca was interested. Once she saw the result of her restless activity she realized that Mom may have had a point about staying still.

She is a bit of a challenge. Her teenage years should be *interesting* and I mean this in the sense of the saying “May you live in interesting times.”
Posted by Sarah at 11:40 PM