Yesterday was Jake and Nate’s first day back at school. Nate is in first grade and Jake is in fourth.

We had done our back to school shopping weeks ago, which had turned out to be a good thing. Last Friday the school had its new student and kindergarten orientation. I try to swing by the school that day to drop off school supplies and have the kids see their new classrooms and meet their teachers. When we were visiting Nate’s teacher she mentioned that there had been a typo on the first grade supplies list. He needed 12 glue sticks, not two. A heck of a lot of glue for one person, but I remember how enthusiastic kids can be with glue.

On Sunday I stopped by the supermarket and got eight glue sticks. I needed two more, but that was it. So then I went to Wal-Mart to pick up a few other things and get the remaining two glue sticks. When I got to the back to school aisle banks of empty shelves stretched before me, there was still plenty of crayons, backpacks and notebooks, but no glue. I even peeked in office supplies, but no luck. A few families wandered in the aisles vainly trying to fill their lists. The image of bleached bones with a few buzzards poking about sprang to mind. I checked out and went home glad that I was done. I could always get the glue later.

Tuesday dawned as a clear brisk day. It was quite a change from the previous week’s weather. We made the bus in plenty of time with Max loudly complaining about the lack of jacket. As we waited a girl and her father joined us. It turns out she is one of Jake’s classmates. We waited about 25 minutes until the bus finally arrived. The boys scrambled onto the bus and both gave me a cheery wave as the bus pulled away. I returned to a much quieter house. Max and Rebecca are noisy, but it is no where near the level that my two older children can produce.

At four o’clock I loaded Max and Rebecca into Nate’s wagon to meet the bus. During the first week of school the bus is always late. Max and Rebecca brought toys and I had a magazine to pass the time. At 4:40 I got to see this:

firstday
Originally uploaded by Teckelcar. That is Jake coming off of the bus first. He was then followed by Nate who popped into the wagon for a ride home. 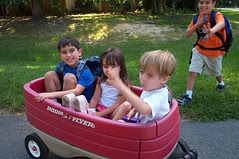 wagon
Originally uploaded by Teckelcar. They both had a very good first day and they are eager to go back.
Posted by Sarah at 3:36 PM