Soccer season is now at full bore. Practices are not nearly as interesting as last season, the brush has been removed and the new field has been seeded. Instead we have to deal with rushed dinners throughout the week. Wednesday is our one day off.

This is a picture of Jake in action at one of his games. He is the boy with the white jersey in the center of the picture.

The picture is blurred, which is due to the limitations of our elderly digital camera. I like the picture very much and the blur does add to the sense of movement, I just wish I could have gotten a bit closer. This game was fun to watch and was the team’s first win. Jake did a bang up job as a fullback. The team played as a team resulting in some beautiful plays.

The next picture is of Nate in action, he is in red and dribbling the screaming pink ball. In the recreational league the home team supplies the ball, which in this case resulted in a very colorful game ball. 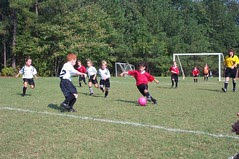 The designation of home and visitor is an arbitrary thing on the rec level. The games are all held on the same fields, it is just a matter of whether the team wears a white (home) jersey or a red (away) one. Oddly enough Nate’s team is the visiting team for all the games. Larry, as assistant coach, likes that the team doesn’t have to supply the ball. I like that I don’t have to think about which jersey Nate needs to wear on game day.

The boys are having fun and they are getting some very good exercise. It would be nice if we could have our dinnertime back.
Posted by Sarah at 10:25 PM