Puppies and a Road Trip

Last Sunday we went on a little road trip to visit with friends who have moved to and to see puppies.

I have been friends with Dianne for years and now she has moved to ! We bought Crunch from her over 12 years ago when we were in and she was in . Both of our families have had multiple moves over the intervening years and we have always stayed in touch. Last year she and her family (husband Andy and her daughter Kandice) were living in upstate and they used Crunch as a stud dog. Meryl got the glamorous task of conveying Crunch up North for his romantic rendezvous. Six months later we got John from the resultant litter. Last March Crunch got sent North once again for another romantic getaway. This time we would not be getting a puppy (One puppy in the house is enough, thank you very much.), but I did want to see the puppies. As an added bonus we would get to see their new home.

We got there in about two hours. They now live in a very pretty part of . Rolling fields of corn and the slate blue smudge of the on the horizon. We visited a bit and toured the house and then we got to see the puppies. Nate was a very happy camper, he loves puppies. 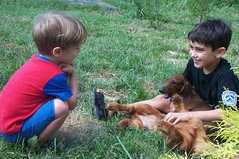 Max,moose,val+Nate
Originally uploaded by Teckelcar.
Whenever Nate sat down he would have at least one puppy in his lap. Here he has Val in his lap and Moose, the longhair puppy next to him. He even sat in the puppy pen with all of the puppies, because they were lonely.

For a truly odd photo you can’t beat this one: 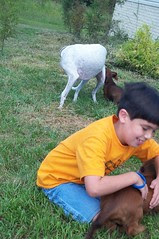 I was trying to take a picture of Jake, but I ended up getting a picture of a Greyhound just as she was turning around. It looks like she has only three legs and no head.

The puppies are gorgeous, wonderful to look at with delightful temperaments. Crunch and Fiona did an outstanding job. But I’m still not bringing one home.