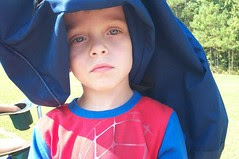 no
Originally uploaded by Teckelcar.

This weekend it was Max’s turn to have a monstrous meltdown. As I was collecting him and his sister for bed one night he said “No, I want to stay downstairs.”

Well bedtime is not optional and it was late so I replied to the effect that he was going to go up. To sweeten the pot I asked if he wanted a bath. Normally this changes his mind and he rockets up the stairs. This time it didn’t work. He repeated his wish to stay downstairs. I then herded Miss Rebecca upstairs and got her started with her pre-bath routine: vitamin, tooth brushing and the collection of pjs. I then went down to collect Max.

He was getting very upset at this point and refused point blank to go upstairs. With him crying and thrashing I carried him up the stairs and deposited him on the bathroom floor. As he wildly plunged towards the door I would scoop him back and help Rebecca brush her teeth. (Three year olds need a lot of help with tooth brushing, they have a tendency to just chew on the brush for a few seconds and declare themselves done.) I then drew the bath and helped the *extremely* cooperative Miss Rebecca into the tub (There is nothing like a tantrum in one child to bring out the best behavior in the siblings). As I draped a sobbing and squirming Max across my lap, I bathed Rebecca. I even repeated my offer to bath him too, but it was to no avail. He was fully committed to his tantrum.

When she was all nice and clean I wrapped her in a towel, dried her off and dressed her for bed. All the while I blocked the door. Max continued on with his demand to go back downstairs.

I then told Rebecca to go to her room and wait for me. Holding Max still I informed him that his chance to have a bath was over. Now it was time for bed. This information did not seem to register so I steered him to his room. Once there he disappeared under his bed. Periodically he would throw toys out from underneath and continued his howling. I, meanwhile, calmly blow dried Rebecca’s hair, tucked her into bed, gave her a kiss, turned out the light and said goodnight. I made it a point to ignore the howling beast under the other bed. I closed the door and retreated to my room to read for a while.

A moment later Max erupted out of their room and shadowed me down the hall, still bitterly complaining at full volume. What followed was an almost comical scene. I stretched out on our lovely chaise to read and Larry quietly put away his clean laundry. A nice domestic moment marred by a wailing banshee by my side. After a few minutes I noticed a slight change in Max’s demeanor. I put down my book and asked him if he wanted to go to bed. For an instant he calmed down, nodded his head and asked for a bath. When reminded that a bath was no longer an option the wails resumed, but not quite at the previous volume. I then led him by his hand back down the hall to the bathroom. Sobbing he took his vitamin and brushed his teeth. Finally the tantrum came to an end.

I was able to bundle up my little boy and gently place him in his bed. I wrapped him up in his blankie and kissed his cheek. I bade both he and Rebecca goodnight and left the room. Peace reigned at last.
Posted by Sarah at 1:05 PM