The Jaws of Destruction

This is our dog John, aka The Jaws of Destruction.

Isn’t he cute up there at the top of the stairs? It is his favorite place to lie down. He looks so well behaved up there, except I know his secret. He is just waiting to sneak through the gate and steal a stuffed animal and drag it downstairs to its destruction.

He has figured out how to nose open the gate, which is fortunately a noisy process so I can stop him before he goes any further. When he does get through without my not
ice, he darts into a bedroom (usually Max and Rebecca’s room, it has the best selection of stuffed animals) and snags a toy. Then he scoots down the stairs with his prize clenched firmly in his jaws and settles down in the den for a good chew.

We have been lucky so far and have lost only a few toys. If I catch him on his way down the stairs the toy will only be slightly damp and otherwise unharmed.

His other favorite illicit chew is his collar. I don’t know how he does it, but he has chewed through two of his collars. This is his latest victim: 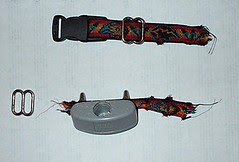 As you can see he has also gnawed on the receiver of his collar. We have an invisible fence and he needs to wear his collar when he goes out. As a result he is wearing Rally’s collar until I can replace his old one. At 13 ½ years of age, I regard her as a low flight risk. Rally just puddles about in the backyard, just happy to be outside.

Hopefully this will be the last collar I have to replace. It will be his fourth collar. He out grew his first collar and then chewed through the next two. I’m glad that the company’s issues a free replacement after you pay for the first replacement.