But Will It Fit?

Last week Nate kept finding tiny plastic beads on the road, some were red and some were green. He felt compelled to pick them all up as we walked to and from the bus stop. This was a constant source of aggravation for me in the morning as he would keep dropping further and further behind us. The worst part, though, was how he would keep edging out into the road. We live on a fairly quite cul-de-sac, but his single minded pursuit of the beads was dangerous. In the end I confiscated that one day’s collection and tossed them in the garbage.

At first they mystified us. Where did they come from and what are they for? That question was answered when we went cleat shopping for Jake. We had gone to Dick’s Sporting Goods and found a huge display of plastic BBs by the bathrooms. Ah-ha! Somebody (or bodies) had been messing around with an air gun on the road. The pellets Nate had found on the road were the same size as the ones in the store. Rebecca was fascinated by the display and found a few loose ones on the floor. I had to pry them out of her hands as we left the area.

A few days later Rebecca ran to me in tears. She kept poking in her right nostril saying “Ball, ball, it hurts.” Since she regularly sticks her finger up her nose I thought she had a booger in her nose that she had accidentally shoved further in. But as you have already guessed, that was not the case. I tipped her head back to take a look up her nose when I saw a bright red pellet peeking out. Ack! I set her down and told her not to touch her nose and ran to fetch the round tip tweezers in the closet. Visions of a possible trip to the doctor danced in my head. Rebecca was a good girl and listened to my admonition and even did it one better. She gave a mighty snort and solved the problem on her own. I returned to a calm child staring at the results of her snort on the floor. That day I banned all pellets from the house. Nate initially protested, but when I told her about Rebecca he reluctantly agreed that it was best not to have the pellets about the house.

Of my four children she is the first to jam something up her nose. She has always been the child most likely to stick things in her mouth. Hopefully she has learned her lesson and will not stick anything else up her nose. 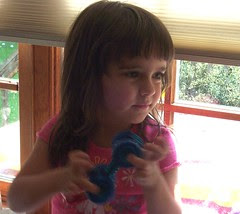